The 5 Step Method covers the major rules of standard American English pronunciation. These rules are the ones used by professional speakers. Reducing and blending sounds still lead to professional speech because they contribute to the standard rhythm.

Americans like to sound casual, so we barely pronounce certain letters. For instance, we don't pronounce the O in the word “to,” the A and D in the word "and" and generally the vowels in the small words like "for" which is usually pronounced "fr" or "can" which is usually "cn."  There are many key examples to this that will give your speech better flow. This step is essential in helping you master rhythm in Step 5. Diagram reduced sounds by crossing out the letters you do not hear, such as O in "to."

Another commonly reduced sound is H in the common words his, her, had, has, and have. We often drop the H when the meaning is clear, such as when pointing to a man and saying, "What's 'is name?" Or, we may not say H in the repeated use of the word "his" and "her" in a story about a man or woman. Perhaps we will say the H about half the time. In the answer key, the crossed out H's may differ from the ones you chose. That is fine. Only make sure that you do not omit the H in words other than those listed above, and make your choices based on expressing meaning clearly.

To read these sounds, attach the reduced word to the one that follows. For instance, read "new to America" as "new t'America." With reduced H's attached the word to one that proceeds as you read, such as reading "with her" as "with'er."

Here is a list of common words and how to diagram them:

As we go through the rules of the 5 Step Method, we will diagram the passage below step by step. Try doing it yourself and then see how you did in the answer key that immediately follows. Step One: mark reduced sounds. There are not too many.

1. The woman was speaking to her daughter's teacher on the telephone. She was new to America.

2. When the teacher talked about grades, the woman thought she meant levels, not letter grades from

tests or grades for the class.

3. They talked for twenty minutes. The teacher seemed irritated, but the woman knew her daughter was

intelligent and would do fine in school after she adjusted.

4. At last the teacher scheduled an appointment with her. She said they would discuss the daughter's

5. The woman was glad. She wanted to meet the teacher and find out more about the school system. 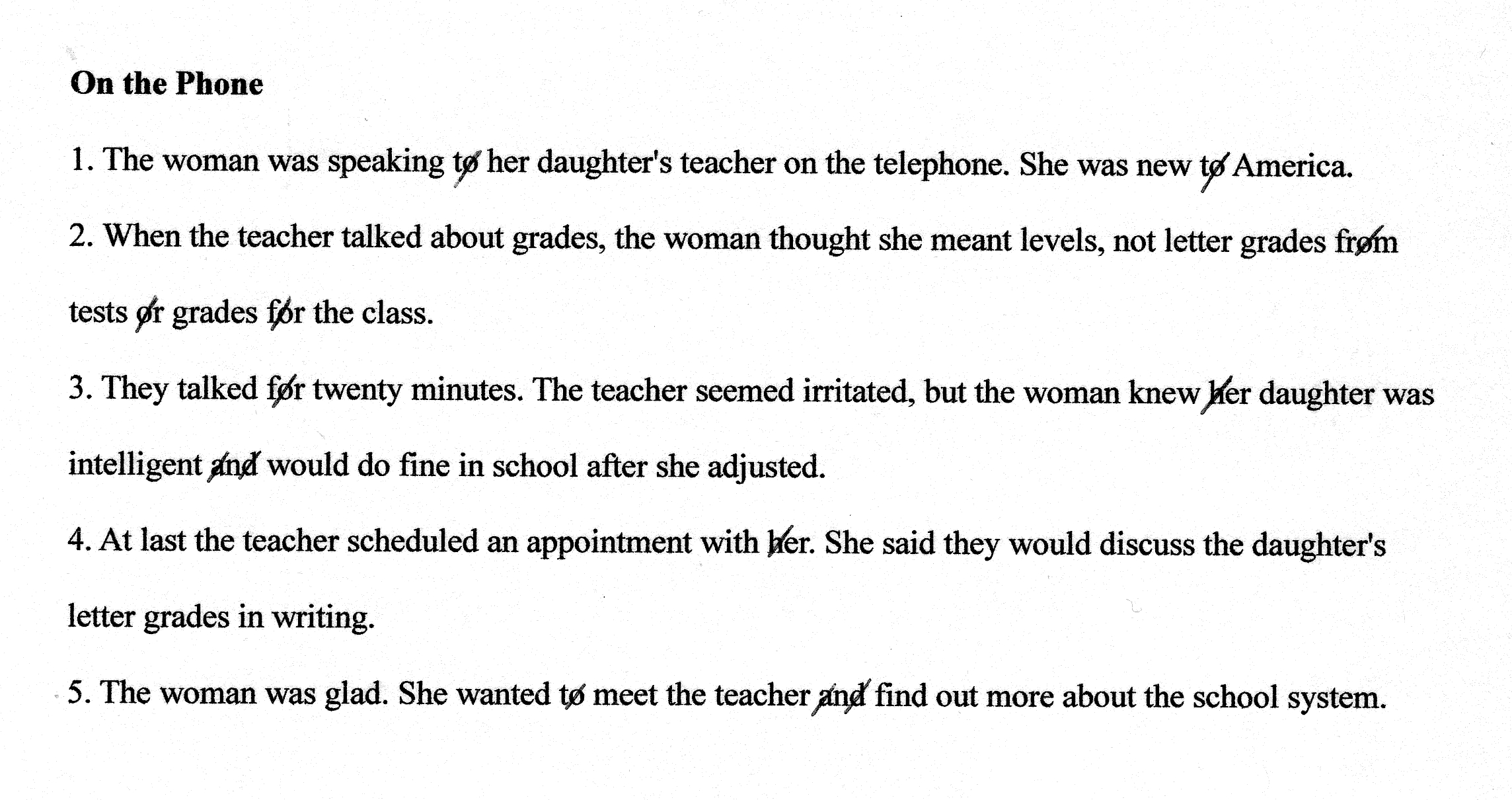 1. Blend small words together. When you see a preposition next to "a" or "the" say both quickly and don't be afraid to let sounds flow together as if the words are combining to form one big word. For instance, "but the" becomes "but-the" with a very small pause on the T. "On the" becomes "onthe" and "or for the" becomes "'rf'rthe." It is as important to blend and reduce sounds as it is to stress them. Also blend common phrases like “once a week.” If the phrase is very common, think of it as one large word.

2. Use flowing letters, like S to merge words and create flow. Say "what's'sname" without breaking the words apart at all. Pay attention to “is” as this word will frequently blend.

3. Blend "and" and "or" with the word that follows. These words were reduced in step one. Now blend to the next word. Say "Fathers 'nMothers" or "bread 'nbutter" or "more 'rless." You can also blend all three words together, but sometimes this may interfere with clear speech.

4. Contractions. Even when contractions are not written, blend the words quickly. For instance, do not say “I am” as distinct words. Rather, blend them as if they are almost the contraction “I’m.” Between two vowels, sometimes we hear a small “y” or “w” sound. Do not be afraid to use this to blend two common words. You can say “Iyam” or “Weyare” for “we are.”

*Note: always blend “a” and “the” to the word that follows. These are not diagrammed because they are tied to almost every noun.

Diagram Blended sounds by drawing a u-curve between the sounds that should blend. Let's add this to our text, On the Phone. If you want to look at the text first, go to the original version. 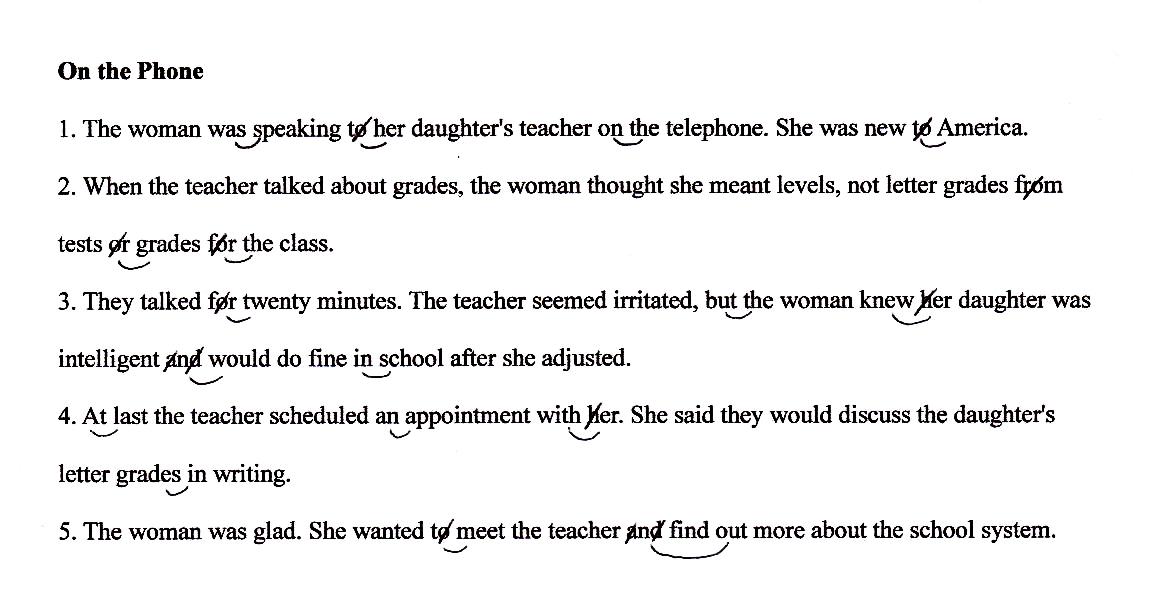 Step 3: T-Sounds and others. The American T is very different from the British T and actually has 5 different pronunciations in American English. Other troublesome consonants are L, R, S, Th, H, V and W. Depending on where you are from, some of these will be difficult and others easy. In Step 3, we mark all T-sound changes (see below). Only the T-sound changes are diagrammed here, but if you struggle with other sounds, such as L or R, be sure to underline any personal "trouble spots" during this step.

T becomes a D when between two vowel sounds or between a vowel and the letter R or L. This is a very soft and fast D sound. If you say a hard, strong D, that will not sound correct. Read these words:

Notice that vowel sounds and spellings can be different. Reduce T for vowel sounds, i.e. say "dauder" for the word "daughter."

This can also occur between two words when T is the last letter:

* Note: when diagramming, we will use the blend symbol from Step 2 with these phrases.

Do not change to a D if the syllable is stressed, as in the word "Italian."

T becomes a hard N when it comes before an N. Also, vowels can be skipped here. Read these words:

T is silent when it comes after N. Read these words:

T is a "stopped" sound at the end of words. We do not say a full "T," but stop the sound only. Practice with these:

T is normal when it is the first letter. No change here.

Why does T change?

The letters T, D and N are made in the same place in the mouth. As a culture, Americans over time reduced the T sound. Because the tongue is in the same place for these 3 letters, T-reductions naturally coincide with D and N sounds. 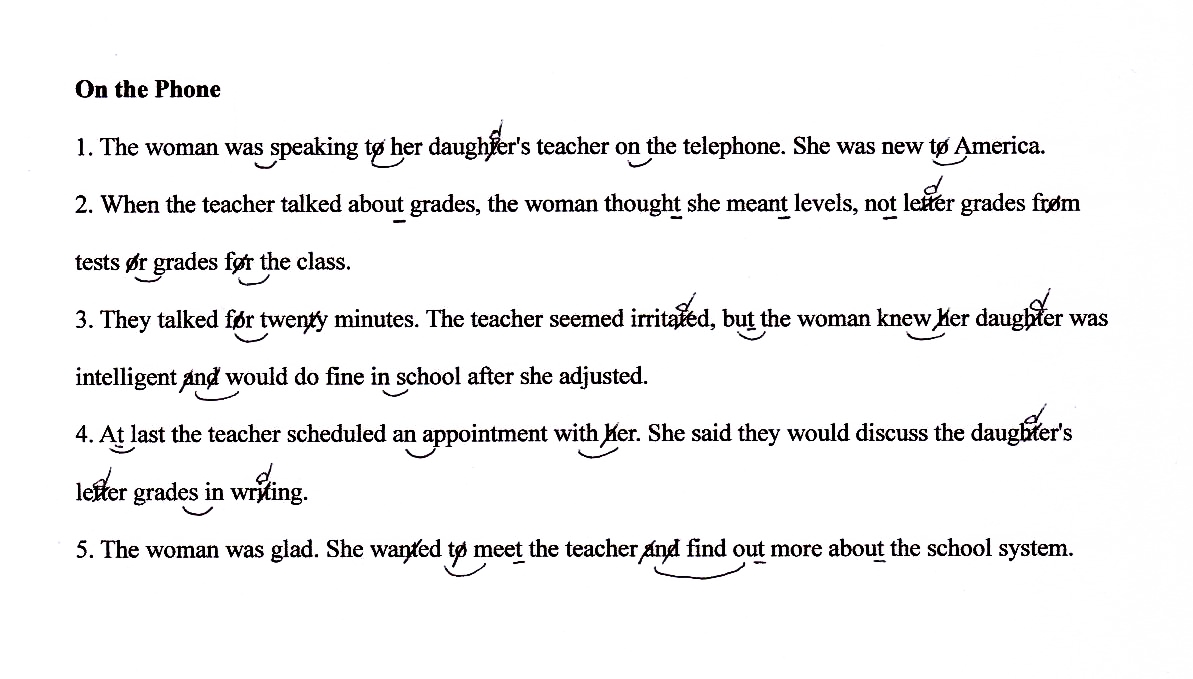 The vowels are a, e, i, o and u. In American English, each one has two sounds. Also, because some words come from other languages, you will find that some letters can have 3 or even 4 sounds. It is easiest to learn the sounds and become confident in hearing them through diagramming and listening.

The short u sound, called the schwa in phonetics, is also important because it is the simplest sound in the language. It looks like an upside-down small e: ə. When a sound is reduced from common use, it becomes the schwa. This means that the schwa can appear with many different spellings.

When diagramming, short vowels are noted with a small u over the vowel, except the schwa. For the schwa, we will simply put a dot. Long vowels have a line over them. If a vowel sound uses a different letter, as in the letter "a" when it has the short "o" sound, we will write the letter and symbol over it. For the  æo sound, we will use a long upside-down u and for the  ü sound, we will put a double-dot over the letter, whether it is "u" or "o". If two vowels are next to each other and one is silent, cross it out. You do not need to cross out a final silent e, as that is so common.

Let's practice with On the Phone.  We will diagram all the vowels in sentences 1 and 2. In sentences 3, 4 and 5, we will only diagram the schwa sounds. Practice speaking these vowels aloud, being careful to understand the symbols.

We have some preferences for where we place the stress on syllables and which words we will likely stress in a sentence. Even if your vowels and consonants are perfect, if your rhythm is unusual, many Americans will struggle to understand you. Rhythm is cultural and never learned systematically. Because Americans did not learn it, we do not know that we are using it and most people do not know why they struggle to understand international speakers. Speaking with American rhythm will polish your accent. A few simple rules are below.

Stress what is new and important to your meaning. Many other languages are more subtle than American English. We are not striving for music. We care about the message we are sending and how to send it clearly.

If you are not sure what's important, a noun is usually a good call. Nouns, until they become pronouns, represent new information.

Rules 3: Verbs When There are Pronouns

If a sentence has a lot of pronouns, the verb is probably more important. Pronouns represent known information, not new information.

If the reading passage or spoken story is long, what was new information at the beginning becomes repeated information toward the middle and end. Then the adjectives and/or adverbs may become what's new and most important.

Diagram passages by putting a stress mark over the important words. Remember to put the stress mark on the correct syllable. 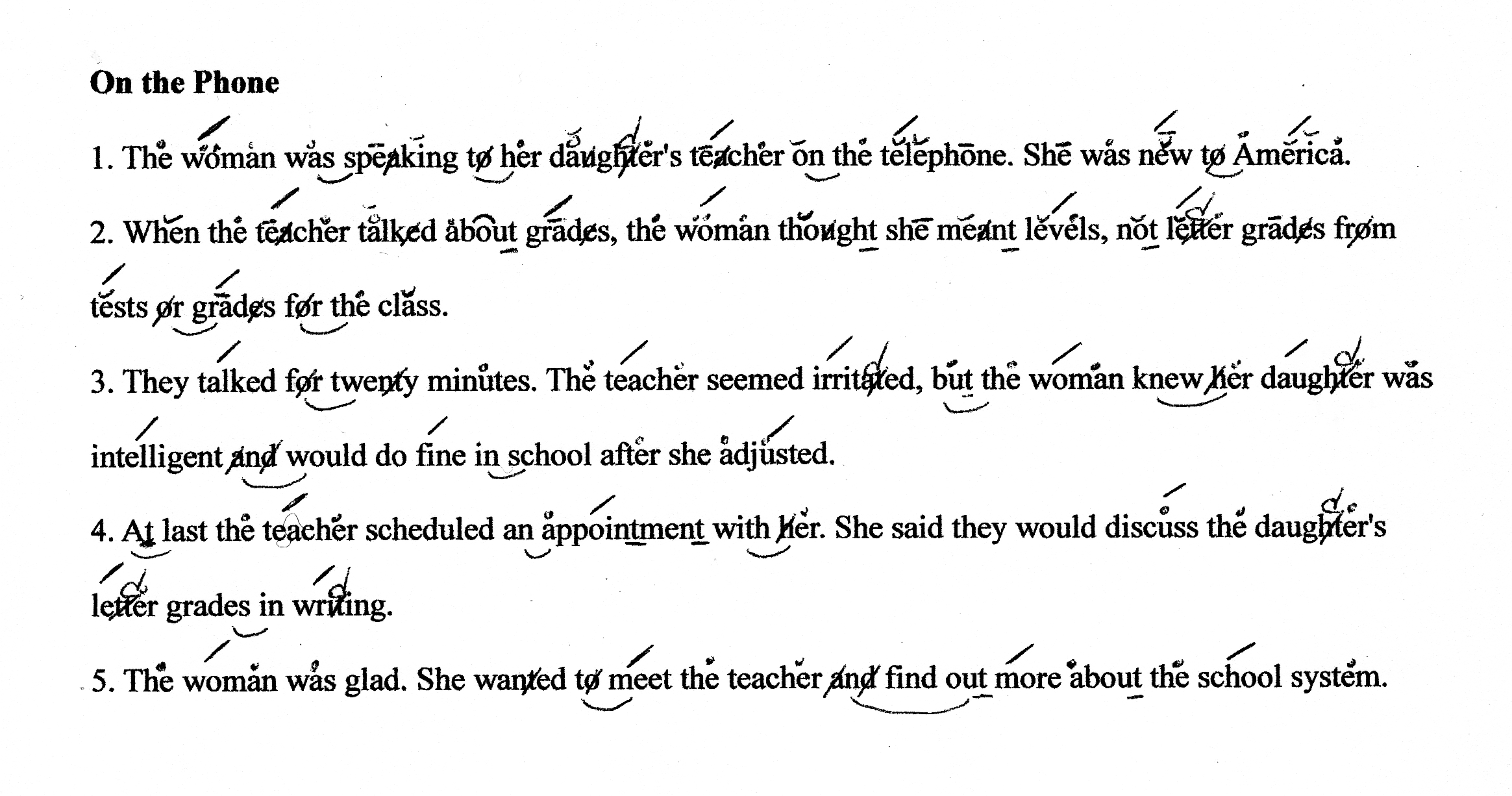 Send us a message and give us your ideas or questions about learning American English pronunciation. © 01/01/2009 Speakmethod.com/I.E. Tutoring: English Pronunciation Learning Center, Seattle, WA